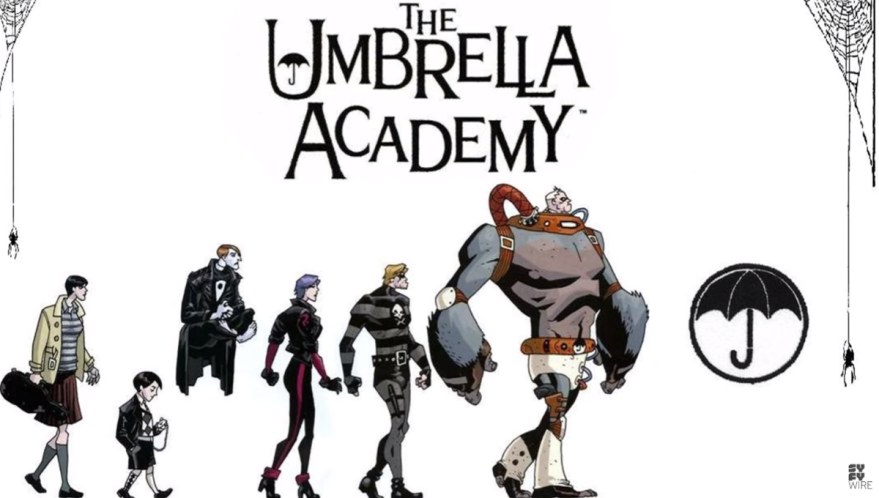 I binged the Netflix TV show and read the six part comic series it was based on, “Apocalypse Suite,” last weekend, and I’m currently reading the follow-up comic to that series called “Dallas.”

In “Dallas” we find out from god, in guise as a cowboy, that Klaus can’t die. Basically Be The Cowboy god doesn’t want him and the other guy, the devil, also doesn’t…want Klaus. So he’s kind of among the likes of universal unlikeables like Deadpool – immortal rejects who wear the in-between in style.

In the comics Klaus is known as The Seance. It’s like his code name. Aesthetically Klaus is a terrible mix of goth antiquities dealer, Miami drug raver and undead disaster punk. I love Klaus.

The Seance has a ton of powers. In the Netflix series he’s portrayed as someone who can talk to the dead, and in later episodes, he can conjure the dead too, i.e. make them physical. As this decent power run-through states, to those without “Sixth Sense-style abilities, this “Patrick Swayze-ing” looks like telekinesis.” Which is so cool and immediately made me think of one of my favorite manga series Shaman King!

Tiny tangent here: In Shaman King the characters have the ability to call on spirits to fight on their behalf. They have to bond with one particular spirit that evolves with them. Some spirits are naturally stronger than others, but every character develops a unique relationship with their spirit. Kind of like Pokemon but with ancient Japanese samurai, fire spirits, Judeo-Christian angels and Mayan jungle gods. Oh and Faust.

I kind of see this unique 1-to-1 connection in Klaus and Ben’s relationship. Klaus has the ability to probably materialize several ghosts. Even though Sir Reginald Hargreeves was a terrible father figure (I think that article I linked to stated he couldn’t really even be considered a father figure) he was right when he said that Klaus had only scratched the surface of his potential….in that weird scene where Klaus gets a shave from him. Also might have been a hint to the fact that Klaus can’t die (Misfits who?). Also might have been a reference to the Dumbledore scene in Deathly Hallows when Harry gets avada-ke-fucked for the second time and Dumbledore’s like….hullo harry.

The ability to materialize several ghosts is a big one. For those thinking of the possibilities – imagine a sort of faux-telekinesis. Personally I think he could use ghosts as sort of physical, unseen, extensions of himself. Meaning they could act as aggressors, like we see with Ben, or even as shields. They’re already dead, so what’s a few bullets in conjured ectoplasm? Klaus in the TV series is far too chaotic to realize these capabilities, but we see that in both the live-action and the comics that Klaus’ abilities substantially spikes in times of need, e.g. when he telekinetically stopped the (comic-spoiler) giant chunk of Moon from crashing into the Earth.

Perhaps we’ll even see him be able to resurrect the dead somehow (ahh AHS Coven?). He’s also able to inhabit the bodies of other people through his spirit by way of some form of astral projection – which sounds cool but … it leaves his body vulnerable (as in Aang entering the spirit realm, Penny astral projecting in The Magicians, or Ambrose being illegally gay in Sabrina’s Netflix show). Altogether, with powers from both the Netflix show and comics, I could see The Seance breaking top three of the seven Umbrellas Academy siblings.

The current top three are Vanya, Number Five and Allison…who might be number 1 actually. She actually has reality-bending powers in the comics…but it’s limited to her voice which of course could be circumvented if she simply stated, “I heard a rumor that I didn’t have to speak for things to happen.” Even in the show however, she remains in the top three. In the show Allison has more or less Charles Xavier type mind-control abilities, or if you’ve seen it, The Legend of the Seeker Confessor powers. If at all possible, I think Allison could probably either, amplify her voice for more crowd control (her fame could lead to some nasty wide-ranging societal effects) or, interestingly, work with Vanya’s sound-control abilities and make something unstoppable.

Number Five is the trickiest because he deals with time travel – which he doesn’t have a handle on. I’m not sure if this changes. If it does, he could rewrite anything/everything – a possibility that warps with Allison’s reality-bending powers. At the highest level, Allison could probably unwrite anything Five attempts to redo by asserting a certain timeline, or maybe even negating Five’s powers altogether. It’s a possibility, but since there’s a god, devil and other higher beings in the comics, I don’t think this level of reality-bending would ever be available to Allison in a plot that makes sense.

Now Vanya, Diego and Luther are all physical-based super-powered siblings. Vanya might have some mind-control abilities – she certainly astonished the people who gave her first-chair – but I’m still considering her primarily physical in her abilities – which are by far the most destructive of all the siblings and remind me of Daisy’s cosmic Quake powers in Agents of Shield. Diego has the ability to hold his breath for an indefinite amount of time…made me think of Percy Jackson. He can also throw daggers with precise aim, which is basically Bullseye from Daredevil, and in the show he can curve them as well. Which, finally, moshed the curve-the-bullet assassins of Wanted into my personal reference collage for this character.

It’s this final aspect of his powers that makes him slightly more interesting than the incredibly bland MCU Hawkeye..if he can curve objects to go to wherever he wishes, than I think it makes more sense to consider his ability as having a touch of telekinesis to it – in particular touch telekinesis, which is fun and cool and something I think Superboy has. The special thing about Diego though is that his objects have to be thrown to be telekinetically altered. This means the trajectories are changed in mid-flight, something that might make it more like a preset that happens in the potential energy stage via touch that then unfolds through kinetic energy – making a it a bit like Gambit’s abilities. This hinders the extent of Diego’s ability a bit, tactile telekinetics can release kinetic energy anywhere they’d like across the entirety of something they’re touching – so Superboy could balance a truck on his pinky, or flip a person upside down with just his finger on their forehead. Diego would have to release something before the alteration takes place, putting it in those less-than-detailed superpowers that don’t really fuck with the laws of physics – even fictional ones.

As for Luther, he’s the least powerful of all the siblings with the most basic superpower there is. His durability, strength and tactile abilities (let’s go to the Icarus!) aren’t anything remarkable – even Hazel, with no powers, could incapacitate him for a good while. His main superpower might be his loyalty, which eventually becomes a liability…so never mind!

Overall I’m most excited about the possibilities of The Seance – visually he could totally materialize and freak out a bunch of people maybe? If he could push spirits into bodies that would give him even more mayhem-wrecking potential. Against Vanya, he might be the only one able to incapacitate her directly one on one by inhabiting her body and making her pass out. Allison is, as it is with all characters with reality-bending capabilities, a wild card whose power entirely depends on the writers and plot points. At her default, TV-show level of ability, she’s correctly at Number 3 – Vanya could alter the sound wave in any number of ways, e.g. to cut her vocal chords, and Five could get to her quicker than she could say “I heard a rumor.”